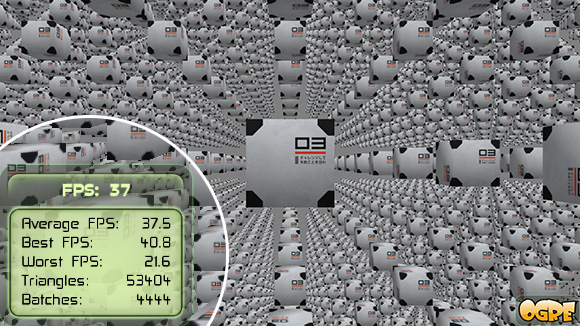 Seeing as performance has been on my mind recently, I tweaked the core render loop a bit and saw some reasonable gains. The one thing I realized is that most of the objects in the scene are static, and don’t need their combined transformed matrices recalculated every frame. I expected to see wild improvements after caching the values. What I received was a decent 50% gain. Not monster, but certainly substantial. Now the average framerates are in the upper 200’s to lower 300’s. More acceptable but still maybe not where I want it to be.

Just as a sanity check I decided to recreate the same exact 13k cube scene in OGRE, a popular open-source 3D engine. Too my surprise, performance fell to the floor. In OGRE I was only getting between around 30-80 fps, while my custom engine was getting over 5  times the frames-per-second. So this makes me feel a whole lot better about the situation. I’d also like to do the same test in Unity and some other engines and see how they compare. As a quick test, though, I’m quite satisfied.

All things considered, I’d still like the performance of my engine to be a lot better. The reason I am even working on this is because I have an idea in mind that doesn’t seem feasible with current middleware. The core aspect is a robust physics simulation, and I expect to have tens (or hundreds) of thousands of objects animating simultaneously. Maybe the reason no one has done what I want is because current PC hardware and software is not up to the task. Maybe no one has tried. Not sure, but I want to make it happen. We’ll see soon enough.