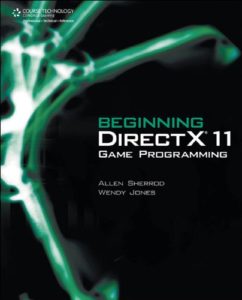 Beginning DirectX 11 Game Programming by Allen Sherrod is, what I’d consider, a great introduction into DirectX programming. Just to be clear, it’s really only an overview of the DirectX APIs (Direct3D, DirectInput, etc.) and not really a graphics or game programming book (despite the title). So there is very little in the way of actual gameplay type programming, as you never really get to the point of having any sort of game demo. In that same respect, you don’t really deal too much with computer graphics theory, though there is some brief coverage of lighting models in regards to shader programming. That said, what is in the text is a good start to learning the DirectX 11 API and getting some foundation knowledge of the Windows platform.

The book covers basic Win32 window creation, initializing Direct3D, error handling, basic 2D graphics concepts, font rendering, input handling (with Win32, DirectInput, and XInput), fundamental 3D math (vectors, matrices, coordinate systems), cameras, and 3D models. Overall a good amount of topics, and decent coverage of the building blocks for working with the DirectX 11 SDK. While I wouldn’t say the book is for “beginners” (as nothing involving DirectX or Win32 is really for novices), it doesn’t go into as deep a depth as something like the Frank Luna book (which covers more interesting topics like normal mapping and shadow maps). However, I did find the discussion at the end about loading the OBJ 3D file format into Direct3D to be unique, as most books do not go into this.

So do I think Beginning DirectX 11 Game Programming is worth reading? Certainly. It was an approachable read and the Kindle e-book was moderately priced at around $25. For sure, if you are working with the DirectX 11 SDK you will want all the help you can get. Granted, I think some of the other titles I’ve seen had more impressive demos, or deeper coverage, but I felt this was a fine introductory text. I’d even go as far to say that you should read this book first, as it presents the basic knowledge in a way that is much more to the point and not as daunting as some other resources.

The one thing, which is both exciting and sad, is that I believe this was the last DirectX 11 book available on Amazon that I haven’t read. I see there are a few newer books covering DirectX 11.1 or later, but I’d really like to stick to straight 11 due to Windows 7 compatibility. So, at this point, I think I maybe have got as far as the introduction books will take me and I will have to just start developing with it and learning as I go. Not a bad problem to have. Although I still have a few general game engine books in my backlog, I’m feeling more confidant about getting into the trenches of development with my engine and this book has definitely helped.