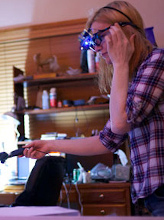 Looks like the VR/AR crowd-funding freight-train is not slowing down one bit. The latest success story being castAR, a set of stereo 3D augmented reality glasses from ex-Valve engineers. At first I was not all that excited about the project, seeing as I am more of a VR buff than for AR. However, this project looks too interesting to pass up.

Basically the device is based around a set of active-shutter 3D glasses. The trick is that instead of looking at a monitor, there are dual 720P projectors mounted on the frames which project the images onto a surface. This surface happens to be a retro-reflective canvas, basically bouncing the images straight back to your eyes. Combined with head-tracking, the glasses can provide a realistic 3D sandbox in which to play in.

Even better, there will be AR/VR clip-ons that allow for a more traditional head-mounted experience. They claim the VR model will have a 90 degree field of view, which actually sounds pretty good (if maybe still a bit shy of the Rift). It all sounds very ambitious, but really amazing if they pull this off right. I’ve backed it.