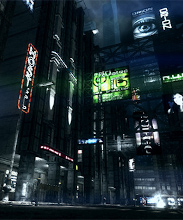 Now this is my kind of game: a cyberpunk first-person adventure set in a dystopian future. Native Oculus Rift support. A NSFW TRON poster (though I bet they will take that out). This just looks too awesome for words. I backed the Kickstarter for $50 bucks, but I’m willing to up the ante later in the campaign if necessary. Really anyone with an Oculus Rift, or that plans to buy a Rift, should throw some money down on this project. Of all the things I’ve played in VR, I think this is my favorite. And I’ve played a LOT. Get on this.