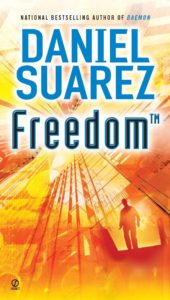 Personally I hate spoilers, so I will keep this brief. Freedom™ is the sequel to the best-selling book Daemon by Daniel Suarez. If you haven’t read the original, you should go do that now. It’s great.

The premise of the first book is that of a famous game developer that dies, and spawns an AI that goes rouge and starts killing people. It then follows the investigation into the Daemon and the people that try to stop it. The whole thing is an action-packed ride, and is especially fun for anyone into computers or gaming as there are several scenes with hacking and bringing gaming concepts into real-life. There is also a science-fiction element with augmented reality glasses, autonomous robots and things of that nature. Top notch.

This second book, Freedom™, picks up where the first book left off. I don’t really want to explain further as I feel that would give away too much of the first book (if you haven’t read it). That said, I did enjoy this sequel. Granted, it was not as gripping as the original (but what sequel is?). There is a lot of action, but I feel some of the suspense of the first book was lost. However it was still enjoyable and worth reading.