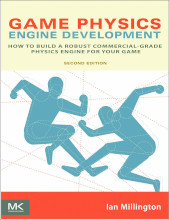 In this review, I will discuss my experience with Game Physics Engine Development: How to Build a Robust Commercial-Grade Physics Engine for your Game by Ian Millington. This is actually the first book I’ve ever read solely on game physics and I think I made the right choice here. Although I have developed several physics engines previously, they were only in 2D and the extra dimension complicates matters significantly. Game Physics Engine Development is a book specifically about 3D game physics, though the author does make a short reference to 2D physics at the end. I felt like the book had just enough math to explain the concepts, without getting bogged down in technical minutia. I also enjoyed the friendly writing style, the approachable implementations, and a rational coding standard.

Ian Millington’s book covers a lot of ground, and each chapter builds up a single aspect of the engine. Many chapters could stand alone in one aspect or another, though they do come together at the end. Some of the topics covered include: basic 3D math (vectors, matrices, quaternions), laws of motion, particles, rigid bodies, mass aggregate physics, springs, collision, contact resolution, velocity and acceleration, torque, friction, broad-phase collision detection, bounding volumes, and more. While the book is “only” 552 pages, there are a ton of things packed into those pages. I found the coverage to be fairly in-depth, without getting lost of mathematical proofs or anything like that. The book is very practical in that way, and a lot of the code samples could easily be the basis of a real implementation.

Overall I enjoyed the book at lot, and breezed through it within a week, eagerly anticipating each new chapter. Being the only physics book I’ve read so far, I don’t feel 100% confidant creating a physics engine myself just yet. However, I do feel it has explained a lot of key concepts necessary in physics development. The book was everything I was hoping for, and gets my recommendation.