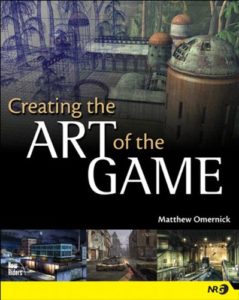 Creating the Art of the Game by Matthew Omernick was a quick and easy read. However, I wish I had noticed the age of the book (and also the age of the reviews on Amazon). This book is seriously dated, and it has not aged well. Although some of the topics are still applicable, and lot of the stuff he talks about is ancient in the game dev industry. All things considered, it’s not necessarily a bad book, it’s just not very useful at this point.

The book covers a number of fairly basic topics regarding art creation for video games. Some of what is discussed includes: gathering reference, modeling theory, texturing, lighting, user interface, and tips and tricks. It became clear a few short chapters in that this book was really geared at beginners. I mean total beginners, as in still in high school, no experience whatsoever. Had it not been so dated, I could still recommend it to high school students. The only problem is that a lot of the content is not very useful anymore. He talks a lot about things like vertex lighting (saying per-pixel lighting is to intensive for real-time use), faked shadowing using square/circle textures, planar reflection by duplicating and flipping geometry, etc. These are all pre-shader era techniques and are somewhat amusing to look back on.

Omernick refers to the Playstation 2 a lot (the popular console at the time) and makes some interesting predictions about what the “next generation” (now the last generation) would be able to do. Clearly the guy has worked in the industry and knows what he is talking about. It’s just that the state-of-the-art has advanced considerably in the past 10 years, and this book does not stand the test of time. However, I did learn a trick or two regarding texture creation (which fundamentally has not changed much) so I don’t feel too bad about spending a few days reading this book.

Unfortunately I don’t think I could recommend this to anyone at this point, given the beginning level and dated content. No worries, on to the next book.