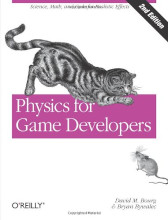 I can say I had a pretty good time with Physics for Game Developers: Science, math, and code for realistic effects by David M Bourg & Bryan Bywalec. It is a very approachable text, and makes a somewhat complex topic more manageable with concrete examples. It’s definitely a book about 3D physics, but many of the samples are done in 2D for clarity. I did not find this to be an issue, and most of the equations and code were digestible. I did see some heat on the reviews, saying that there were errors in some of the code. I could not verify this, but just from reading the book the authors seemed knowledgeable.

At the beginning, each chapter covers a fundamental aspects of physics. Later they go into examples that could be used in a game. Some of the topics covered include: Newton’s laws of motion, kinematics, force, kinetics, collisions, projectiles, particles, rigid-bodies, springs, aircraft, boats, cars, guns, sports. In the last section it goes over some emerging technology and how they work, like touch screens, motion-sensors, 3D displays, and the physics of sound. I very much enjoyed the whole book, and liked that there were practical examples to go along with every topic.

Many technical books can get lost in the math equations, but I found this text to have a good amount of explanation and not too many long proofs. This could be a pro or a con. On one hand it makes reading it a little more straight-forward, but on the other-hand, it may leave out some important details when it comes time to create your own implementation. I’m not sure I would want to base a physics engine solely on this book. It’s not that it was bad, but it was more of a general concept thing than giving you all the code. That said, there is a good amount of code in the book, it just may not be as complete as some other sources.

Overall I was satisfied with Physics for Game Developers. It may not be my favorite physics book (I found Game Physics Engine Development to be a lot better for my purposes), it still seemed worth reading. Now I am beginning to realize the creating a physics engine will not be easy, but the more I read the more I feel capable of this task. I think the book has helped.